I think this is where we talk about redemption and all that after that piss poor showing in the 1999 cup, but really all I want to talk about is that instant replay situation that cost Croatia a PK and subsequently made world soccer history. The fact that a hand ball was called using technology was BONKERS. Apart from that, it didn’t dictate the outcome of the match, but it did effect the momentum and morale. If not for an owned goal and that PK, it would have been a tied match. The use of instant replay to change on field calls is something that shouldn’t be allowed to infiltrate soccer…. I wouldn’t hate reviewing goals, but not plays or handballs like they did this Sunday in Russia. No complaints here, I thought it was interesting soccer and good viewing. Just something a little strange that added to an otherwise high scoring match. I gotta say, those goals were all stunning. Little heart shaped eye emoji to my guy Ned for making breakfast and watching me yell for 90 minutes.

THE DINNER: We went to Antigua and Barbuda for some island cooking this weekend. It was a rainy Sunday, so soup was on the menu! This one is called “Pepperpot Soup” and it’s peppery and veggie packed. The islands are known for soups like this that are similar to South Pacific hotpot. The ingredients are typically local and this one features some sweet potatoes! 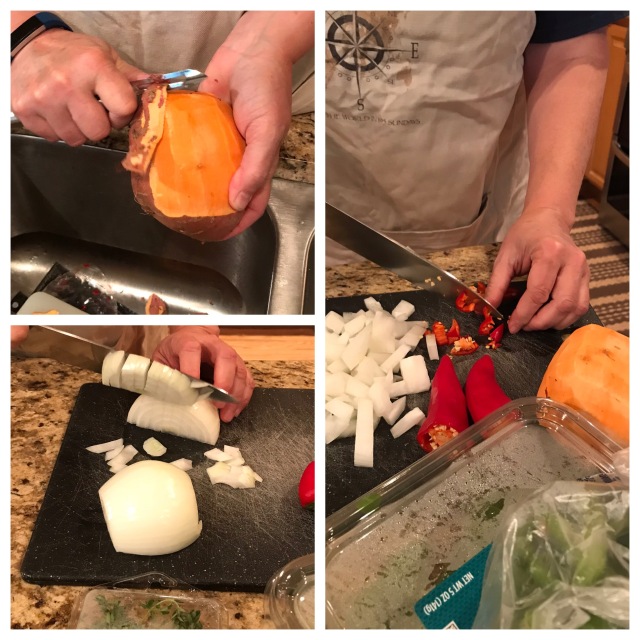 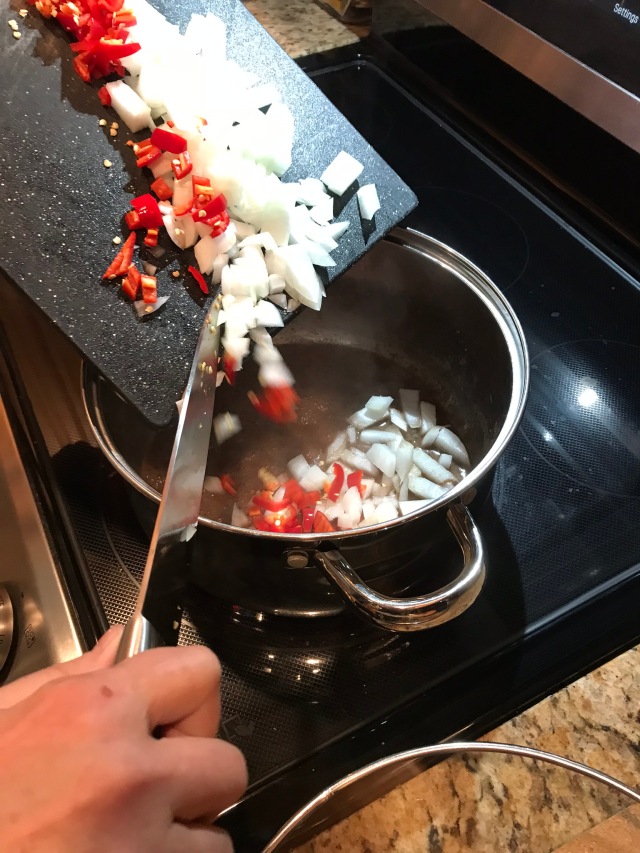 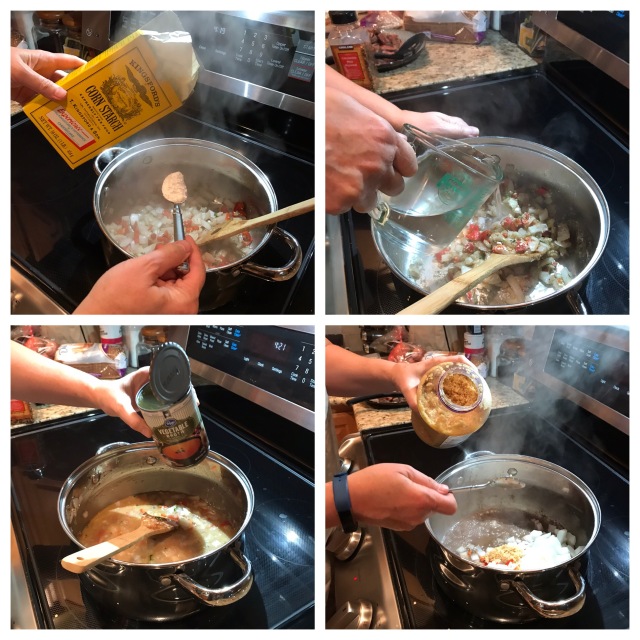 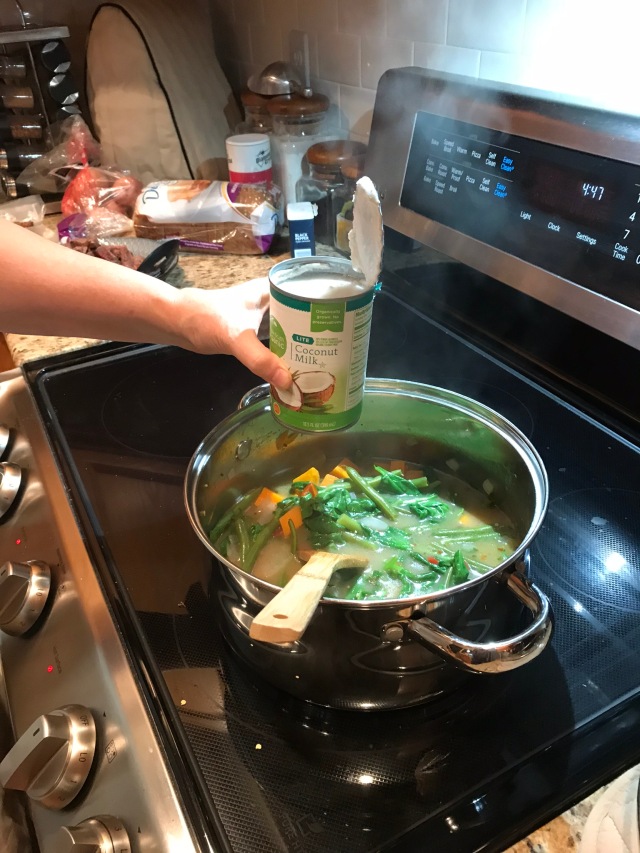 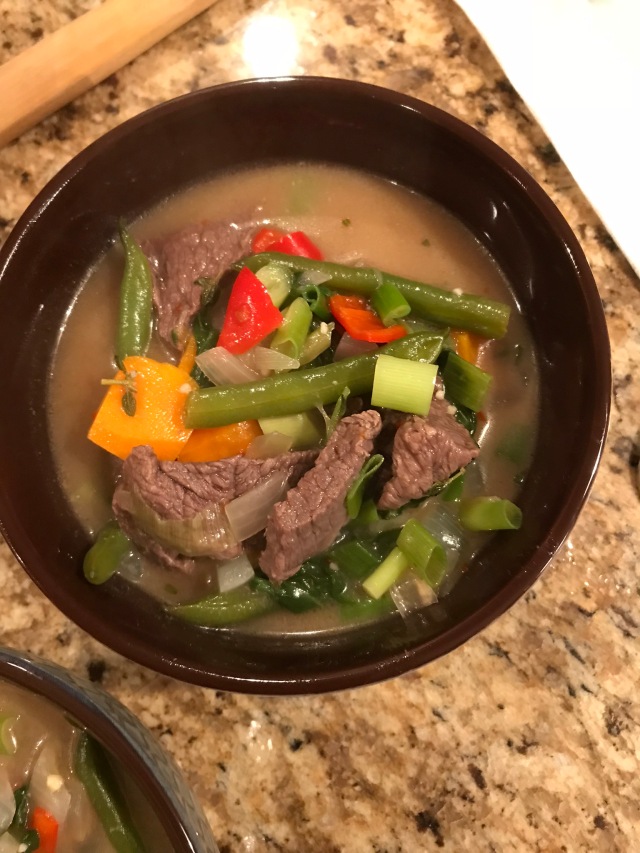 Ease of prep and cooking: 1 STARS out of 5 STARS for this meal!
The nature of soup is it’s simplicity. You throw all the ingredients in a pot and let them get happy. That’s really all we did here. No translations. All around no conversions or metrics! (we did have to use green beans in place of okra due to time of year)

Best dish of all time scale: 4.5 STARS out of 5 for this meal!!
For someone who hated sweet potatoes all her life, my mom loved this soup! While it was spicy and peppery the potatoes cut that with their sweetness and starch. Magical it was said Yoda. The beef sirloin was tender and hearty- while also managing to not be stringy or sinewy. We used green beans as a substitute for okra and that was awesome. Fresh green beans add such a great texture and honestly, I’m spoiled now and can’t even think about canned ones.  It was just what the doctor ordered!

Back firing on all cylinders we will be hitting up #182 for Kyrgyzstan! This means we are 13 countries away from being done and that’s incredible! Closing out this project of 4 years will be something miraculous and amazing.

Music City was where I found myself last week. In the midst of humidity warnings and harmonious live acts, the Grand Ole Opry and the Patsy Cline Museum were obligatory stops on my long weekend in Nashville. Did you know though, that Nashville is the bachelorette capital of the East? They actually call this place “Nash-Vegas” and you will literally see hoards of gals running around town in matching t-shirts and getting into mischief. It’s a spectacle for sure. I never really understood the Bachelorette thing, but those ladies sure looked like they were having a good time. OHHHH, and lest I get ahead of myself and am remiss in mentioning the BBQ, that was out of this world. Spicy chicken might never be the same to me now.

THE DINNER: While I was away, L tackled Iraq by making some kebabs and chicken of her own. Not the Nashville Hot Chicken I was tucking into, but a Middle Eastern version of the grilled meat. This is called “Shish Tawook” where “shish” is “to skewer” and “tawook” means the cluck cluck meat part (read: Chicken). Common marinades for these babies are yogurt and tomato puree, and we did the later. Veggies range from onion to peppers to other meats and typically it’s whatever is available and seasonal. They’re a huge communal tie for Middle Eastern countries…. you bring everyone together to grab a skewer and you can feed a hungry crowd quickly and deliciously. It’s street food with a family flair. 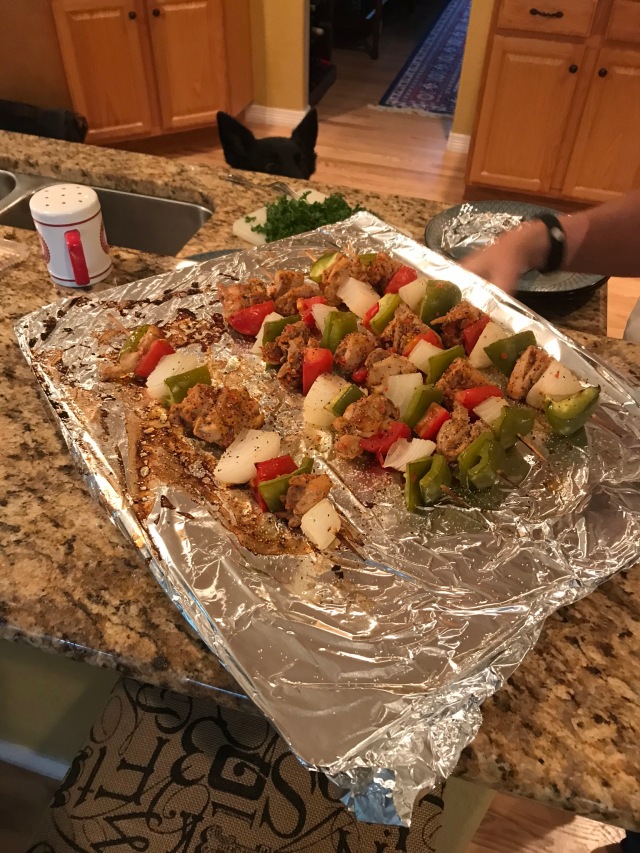 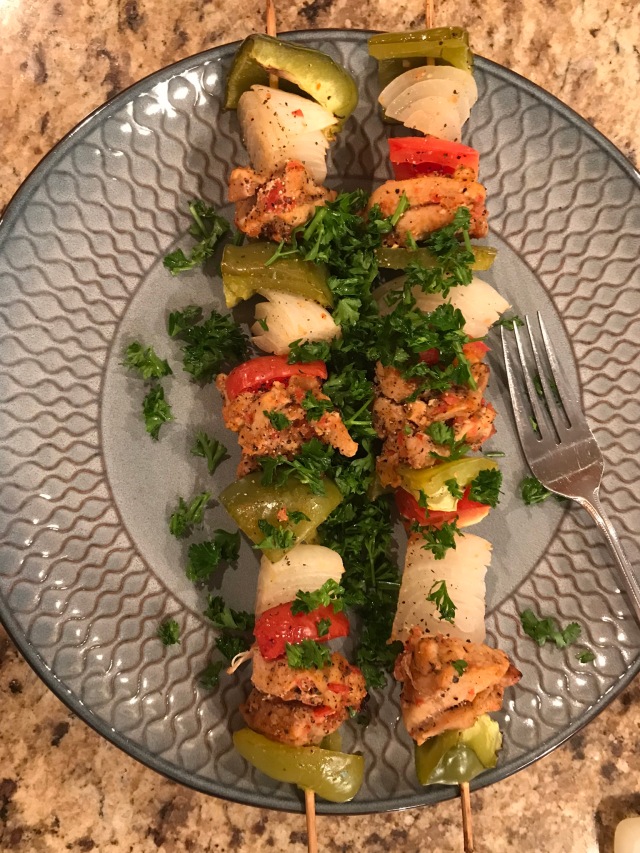 Ease of prep and cooking: 2 STARS out of 5 STARS for this meal!
Not too tricky slight of hand here. The time for marinading will add to your schedule, but it’s not like you have baby sit it. The art of grilling chicken comes into play as well, since I happen to find that a hard undertaking personally. In order to cook it all the way but not dry it out, you need a little skill that lucky for me, my mom possesses. The last bit is obviously the assembly which is labor intensive. All around no conversions or metrics!

Best dish of all time scale: 4 STARS out of 5 for this meal!!
If we are really being honest, there’s nothing particularly exciting about kebabs. That’s not to say they aren’t yummy, satisfying and hearty- it’s just that they’re not memorable. That’s there we landed with this dish. Marinade was simple and added some tomato acidity to the chicken. Fresh parsley stole the show. It was light and summery and overall nailed down a 4/5 stars. No one was disappointed here.

Let’s make sure to drink lot of water and be thankful for the rain we got this last weekend as we venture into the week of our annual Women’s Blast Cup! Excited for some new faces and old faces and all the soccer!! #180 and #181 is going to take us to the island of Antigua and Barbuda!

Having BBQs on patios now comes with the added bonus of getting to snuggle up on newborn infants as I recently learned. My friend’s have used their chromosomes to make some pretty darling darlings and it’s hard to not want to nestle the little babies in your purse and walk out like nothing happened. Can you even imagine how tiny baby fingernails are?! TINY. And little toenails are also tiny. What amazing things that they grow into full size fingernails and toenails. I wonder if anyone realizes this stuff but me sometimes… regardless, shout out to our guest cooks this Sunday! Zach grilled up anything and everything which included some kick ass salmon and in the rain none the less! I might be in a food coma till next summer.

THE DINNER: I baked a triple berry pie and cuddled on patios, but L made some Serbian Pljeskavica which are burgers. It was All American without being anywhere close to All American. So testing out burgers from another country was really interesting and fun. The Pljeskavica are Serbian pork or beef and served in flat bread instead of on traditional burger buns. The toppings include onions and a red pepper spread called ajvar which is a relish more or less.  It’s grilled eggplant and peppers all processed together to get all happy and lovely. 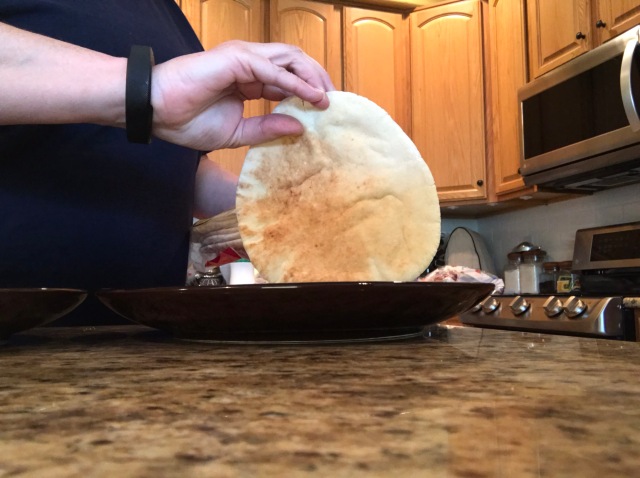 Ease of prep and cooking: 3 STARS out of 5 STARS for this meal!
Lots of moving parts, but nothing outside of what “normal american burgers” would entail. We had to use a cheese substitute for the Kajmal hat was asked for by using Gallego which is a Spanish soft cheese instead. Some Conversion was require in making the ajvar but this was WELL WORTH the effort.

Best dish of all time scale: 4.75 STARS out of 5 for this meal!!
Homemade ajvar is where it’s at friends! simply delicious. The grilled eggplant and red pepper tag team was wonderful and blended into what was really a hummus. The flat bread pita that was used to house this power house was really complimentary of the flavors and didn’t compete for the lime light. Creamy cheese, crunchy pinon nuts and zesty onion and pickles really rounded out the textures and flavors. It’s everything you would want. Well played, Serbia!

Watching some World Cup and slide tackling #179 for Iraq!

It’s been hot and heavy here in the Mile High City. Two large fires both on I-25 raged this weekend and it’s like the whole world is on fire at this point. It’s sad to think how dependent we are on the rainfall and snow pack even when we are such a technological powerhouse of time periods. On the heels of our independence day, it’s hard to not want to grill, smoke s’mores over open fires and blast off sparklers to your heart’s content… but with some caution, celebrate our escape from tyranny carefully this year guys!

DINNER: Ku-waiting for the remaining 18 food countries here in the Mile High City, we picked up our forks and ventured to the desert for some Kuwaiti cuisine. See what I did there? Ku-waiting? Alright, maybe this crazy Colorado heat wave has scrambled some of my brain… moving on. In an effort to not slave over a hot stove, we picked Kuwaiti sweet dumplings called “Luqaimat” which are basically doughnuts topped with honey. Don’t call me honey, darling. ALRIGHT, I swear that’s probably the last pun for this post. 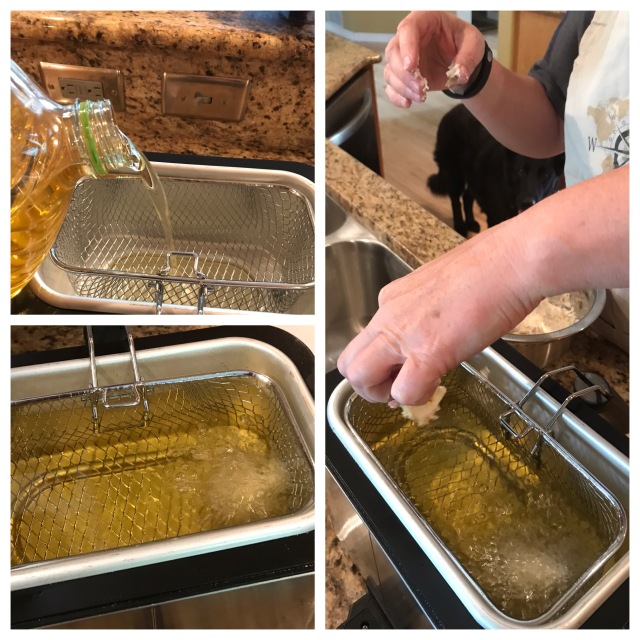 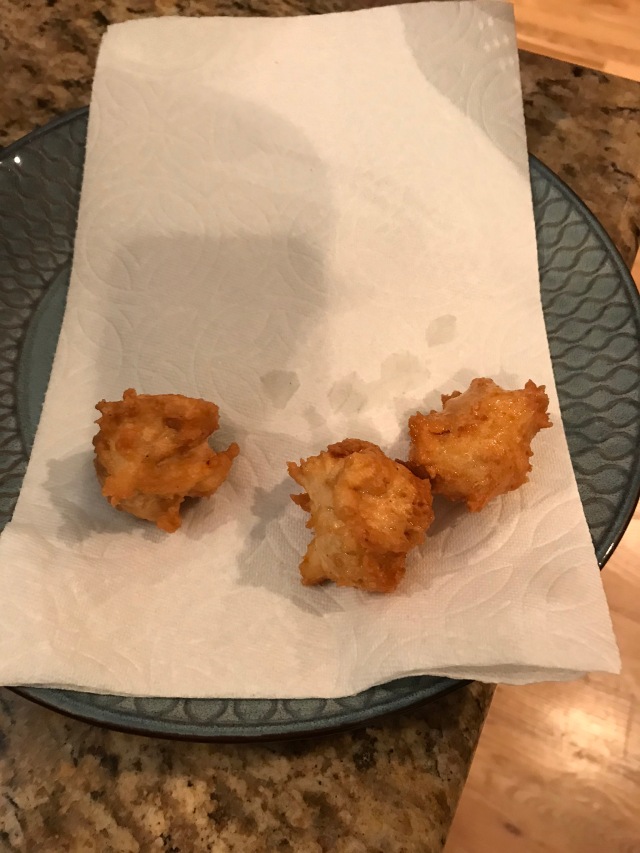 Ease of prep and cooking: 3 STARS out of 5 STARS for this meal!
Frying and making doughnuts is a little labor intensive. This one was no exception to the rule. The ingredient list was short though and there were no special trips to special markets. No conversion or translations so that helps things move along. Be careful frying!

Best dish of all time scale: 3.5 STARS out of 5 for this meal!!
Nothing really earth rattling here, but I mean who doesn’t love fried dough when it comes down to it? Right, no one hates what we were putting down here. There was something sort of odd about putting saffron in the batter and the cardamom played nicely with the honey that enveloped the warm dumplings. The texture was doughy as one might expect and while we didn’t hate them and ate them all, we just weren’t impressed enough to level more than 3.5 stars.

Off to the next country #178 for the food of Serbia! This one will hopefully include lamb in some form, but I’m never ceased to be amazed at what strange turns out recipe hunts produce. So perhaps we will be surprised!

All our happiest moments include food!
– L & K