Hope that this weekend found all you fathers and fans of fathers celebrating in style. It was prefect weather to kick back on the golf course or hit the local fishing hole with your dad. For me, father’s day weekend and mother’s day weekend are just special excuses for me to celebrate my parents. I’m very fortunate in that my parent’s are pretty cool cats– so I try to make sure I don’t put off showing them that till one weekend a year.  We know that grilling is a particularly “manly” and “dad like” past time for the weekend, but as tradition would have it, my dad isn’t the grill master in the family.  Instead, we picked the country that his family is from and cook him some nostalgic Slovak food for his father’s day dinner. Last year he picked Australian food (Week #6) for father’s day feasting.

THE DINNER: Slovak food reminds my dad of his mother mostly. I would hear stories of how Grandma Dutch would make all sorts of dumplings and stews like it was no big deal. The core of Eastern European food is hearty– basically whatever the equivalent of meat and potatoes is for the farm culture in the States. All in all, it is very wholesome, down-to-earth cooking. It’s simple and as a hallmark of the region does not usually contain spices or special “fluffy” ingredients. It’s what was on hand and available. No bells. No whistles. It’s like spending everyday at your grandparents. Slovak food is very cheap, easy to cook, and best of all, extremely delicious!

The main meal of the day is typically the largest. Much like the parallels I’ve previously drawn to American farm life, that meal was supper and the dinner meal, which is usually the largest in many cultures, was more like a light snack. traditional Slovak cuisine can be traced to times when the majority of the population lived self-sufficiently in villages, with very limited food imports and exports and with no modern means of food preservation or processing. So things were killed and then immediately served, which makes “farm to table” movement nowadays seem like it’s vintage throwback. We picked a dumpling dish that includes cabbage and goat cheese called Haluski. The idea of potato dumplings makes my dad’s whole face light up. Which is most wonderful and off sets any and all hard work that making fresh, homemade dumplings brings. 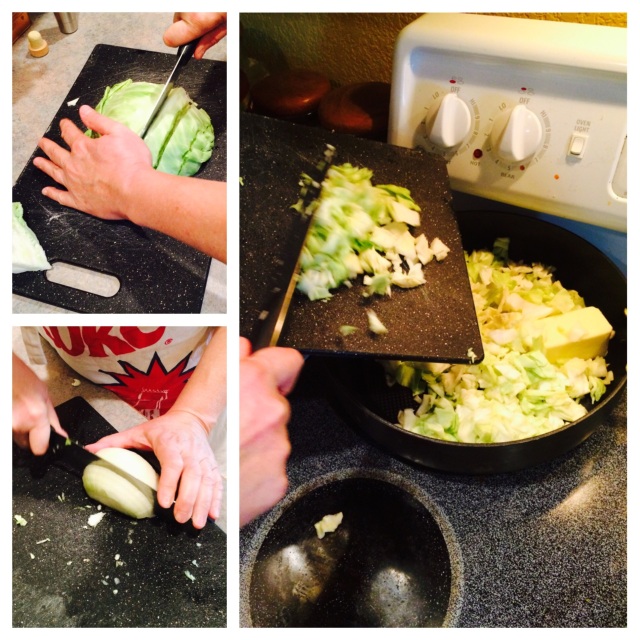 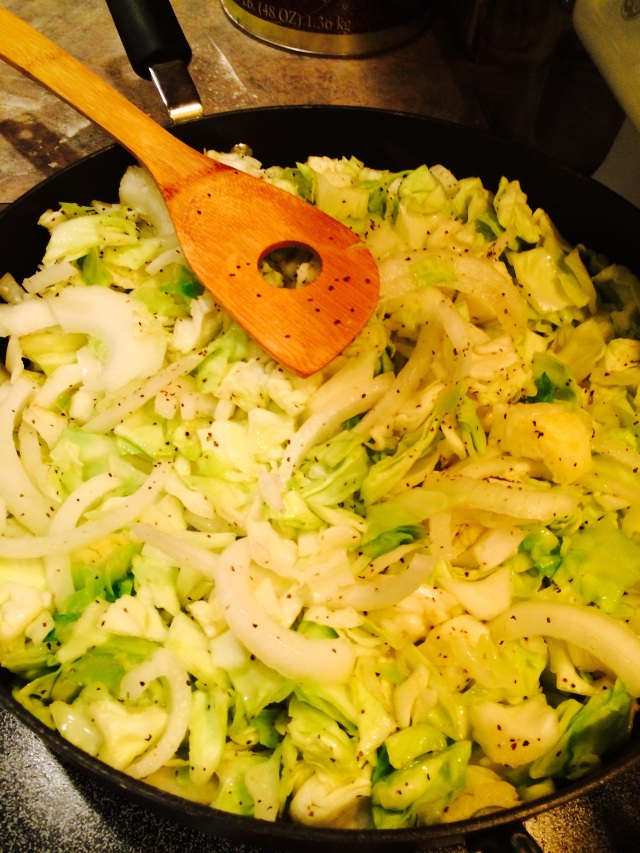 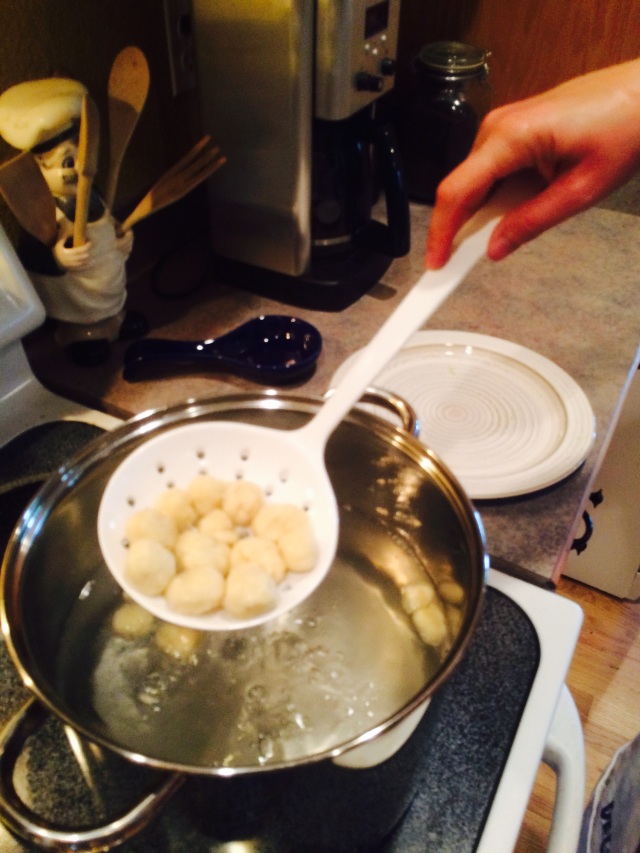 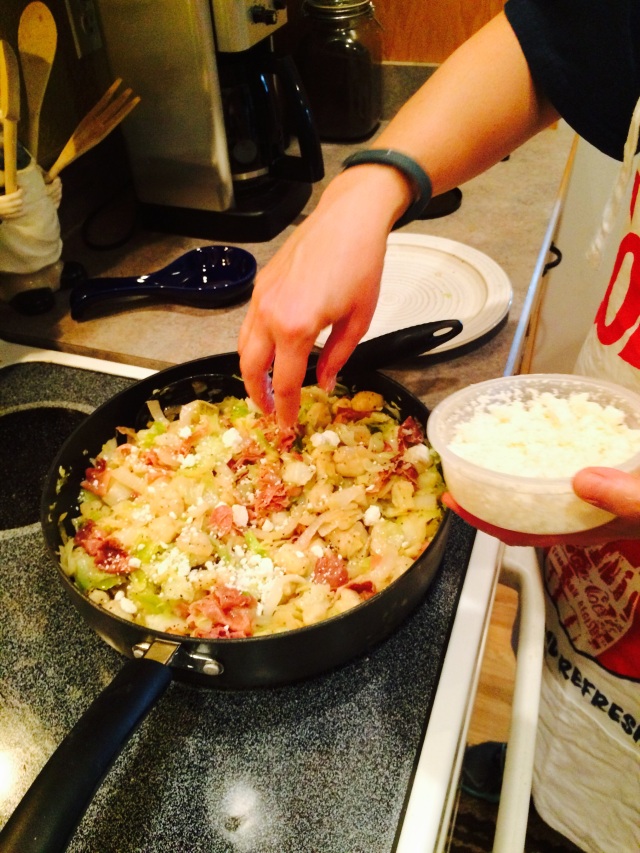 Ease of prep and cooking: FOUR STARS out of five this Dinner!
Be ye warned!! Alright so making dumplings from scratch is something of an art form. My mother, the expert leftsa maker, can make anything with potato dough look like a synch. Let me be real here for a minute and lay down from knowledge for you kiddos, it’s not that easy. She works the sticky, unmanageable dough like it’s her job. Kicks ass and takes names later… and if you ask her, she gives this meal a 2 for difficulty. That’s insane. I’m going to cut to the chase and make sure you know it’s a four for the rest of us mere potato dough mortals out there. But please, don’t let that deter you! You can substitute kugel or egg noodles and still make this meal (and it’s still semi authentic!). The remaining ingredients and instructions are a piece of Jablkový Koláč (Slovakian cake…)!

Best dish of all time scale: FOUR and a HALF STARS out of five for Dinner!!
As a adamant and vocal hater of bread and potato dumplings, I was the biggest skeptic this week. I cannot be won over or bought. I have tasted the actual dumplings straight from the plate in Bratislava and still could not be moved. So, if I’m giving this meal and 4.5– that should move mountains. My dad was impressed and he’s a tough critic. We all raved at the addition of the pancetta and the cabbage. It was delicious. It didn’t lack any seasonings, though one might expect it to since it only contained salt and pepper to taste… it was anything but bland! I think my favorite part was the goat cheese. Perfect addition: it was creamy and tart and complimented well. I had to give it to the dumplings too, they were pretty tasty and they cook up so quick! Overall, this one made everyone in the kingdom of Brovskyland leave with very happy tummies.

Rolling into week #56 with a full head of steam, my sister picked the country! The great and powerful J has spoken and she has picked Montenegro as our next culinary pit stop on AW195S! In true Bond villain form we will spend some time in the Balkan country… shaken and not stirred.